In my lifetime, I have travelled to France twice and both trips have been so different yet so rewarding! France’s fresh fruit and pure, delicious food has got to be one of my favorite memories (along with the natural beauty of the country as well).

I have divided up this post into two regions/areas I believe are worth visiting (even if just for a few days)!

Wow, Paris is absolutely beautiful and full of so much charm! There is history to be found and also great works of modern art that give it the reputation of being romantic and inviting. Both times our family travelled here we stayed near the Eiffel Tour (located in the 7th arrondissement) which is typically where most tourists choose to be due to the proximity to famous sites such as the Arc de Triomphe, le Louvre, and Notre Dame.

In March 2017, we spent four nights at the Pullman Hotel which is cozy and comfortable. Within walking distance of the Eiffel Tour, you can also stroll along the Seine River and go all the way down to the Ile de la Cité, the small island where Notre Dame is located. I highly recommend walking as the primary mode of transportation in Paris! It is easy and the roads are typically very pedestrian friendly with wide sidewalks and not horribly crazy drivers!! In addition to meeting that 10,000 step goal everyday, you will find small cafes and restaurants in alleyways that you wouldn’t have been able to experience before; trust me, it’s worth it!

Eiffel Tour: Everyone hypes up the Eiffel Tour and it’s worth it to go to the top and simply marvel in the sheer expanse of the city! Both times we have gone up the highest you can go at night and it was amazing. Even though it’s dark, you can see for miles with an unobstructed view. I should’ve brought an inhaler with me because it truly took my breath away! The line can get pretty long at certain points during the day, but it is worthwhile to go up all the way to the top as long as it’s something you truly want to do and look forward to doing. 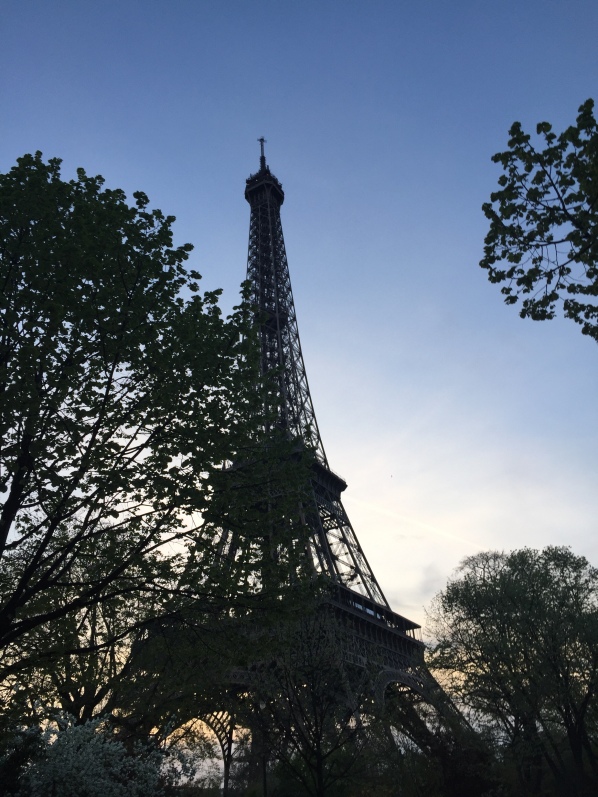 Musee D’Orsay: Personally, I like this museum more than the Louvre because it tends to be less crowded and more accessible. There are a plethora of exhibits, paintings, and sculptures to admire including pieces by Van Gogh and other artists during the realism era. This was especially intriguing for me because during my AP European History class sophomore year, we studied tens of these pieces and it was awesome to see them up close in real life! 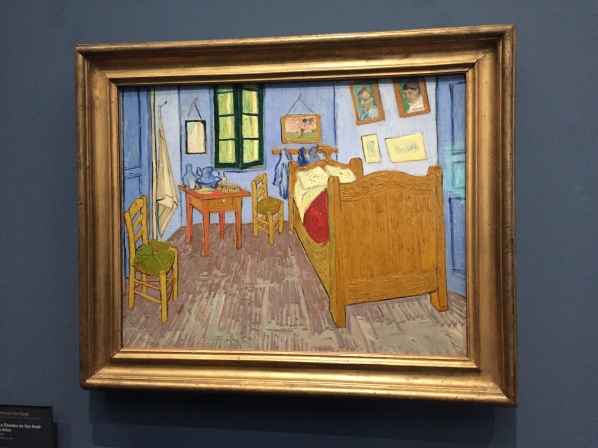 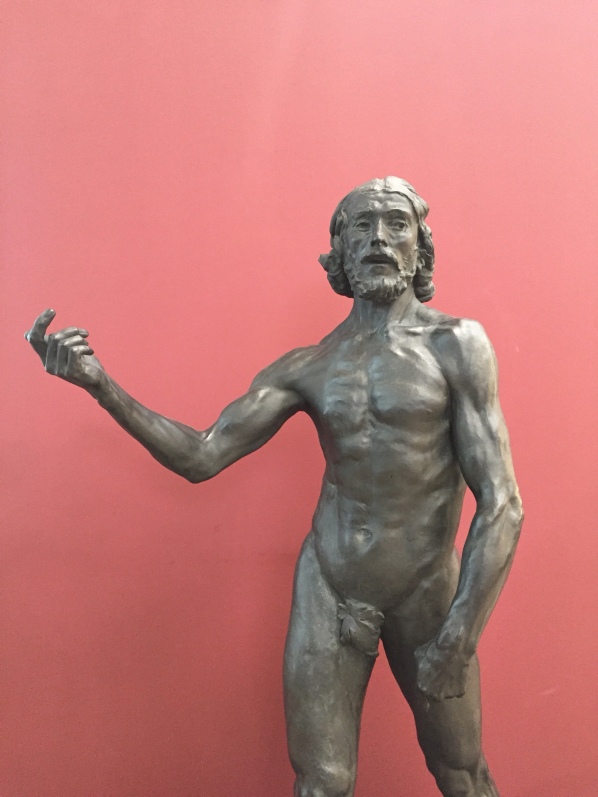 Le Louvre: The Louvre Museum is particularly famous for its housing of da Vinci’s Mona Lisa painting. To be honest, I don’t why the entire world population FLOCKS to Paris to see this work of art. I mean, it is a small (2.5′ by 2′) painting and has a ten foot barrier around it!? Anyways, now that you know why I think it’s absurd to go to Paris solely for this reason, I do believe it is worth to go see while you are there (just enjoy the other art, too!)

Notre Dame: Notre Dame is truly a beautiful cathedral and to get the full effect, I suggest attending mass there. Even if you are not religious, it is quite the experience to stand in awe of the stained glass and embellishments in the church. In addition, my mother attended confession there and she cites that experience as a cleansing and renewing one. If that’s not your thing, just sit down and admire it from the outside! There are plenty of pigeons to keep you company (cue the Mary Poppins music) and you can even buy feed to get some funny and cute pictures for the whole family 🙂 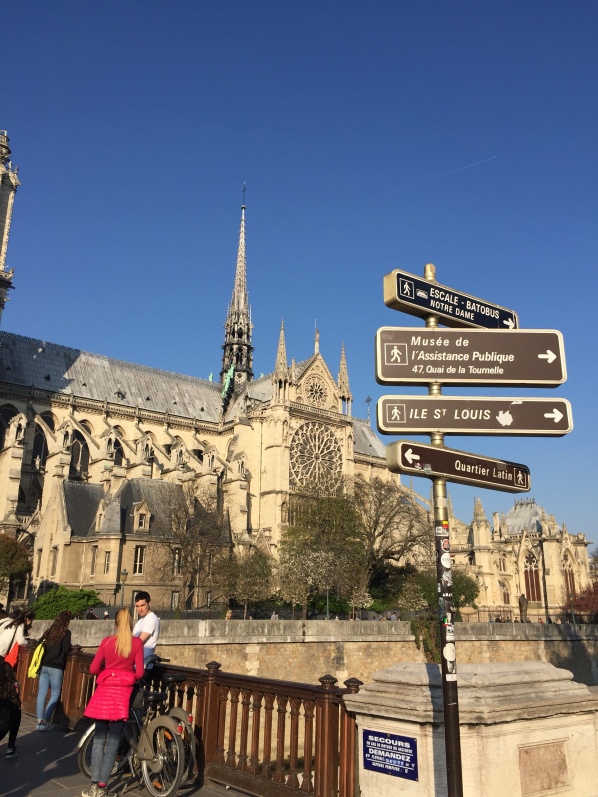 This is all I have to say about some of the specific sites and cannot really recommend restaurants just because I haven’t been there enough to know what is the absolute best food. The Arc de Triomphe is neat to look at and drive around, but I’m not entirely sure what else there is to do besides walk under it and go up in it! In addition, there are usually huge crowds that congregate around this tourist site, and I tend to try and exercise caution around large groups of people due to security/safety reasons. This is not to say you shouldn’t be afraid of crowds or large groups, but just be cognizant of what is happening around you while in one 🙂

Goodness gracious pigeons seem to be EVERYWHERE in Paris!! It was quite the experience when I fed one, tiny morsel of my chocolate muffin to a pigeon at the Louvre and then he returned numerous times with all 200 of his friends! I usually don’t feel claustrophobic, but in that moment I did! So, please do not feed the birds. Trust me, it is for your own good (ha)!

Here’s a little backstory before I dive right into my own travel advice for this city! My mother’s friend lives in Orléans so we decided to drive down to stay with her for a few days. Since the drive was a couple hours, we decided to rent a car from Sixt which came in the form of a Fiat with manual operations. My mom knew how to drive a stick shift, but this car was… erhmmm…. different. To put it in reverse, the fiat had to go into a totally different gear and the Sixt workers were laughing at us before we even left. Once we figured that out, we got very lost! Because we weren’t able to access wifi or bluetooth,  I (the navigator) was trying to give directions based off of one screenshot of a zoomed out map of the city of Paris (easy, right?) Long story short, we went west instead of South, bringing us halfway to Normandy (haha oops). This is BEFORE we realized we had a GPS system in this little fiat *sighs* If there is anything I learned, DO NOT drive in Paris because it is a nightmare and if you are stupid enough to disregard this advice, make sure you know you have a GPS for goodness sake 🙂

Now, this city is truly an undiscovered, mini Paris! It has much of the same charm and architecture, but is much more secluded and has its own unique touches. First off, there is a HUGE cathedral whose architecture parallels that of Notre Dame; however, it is mostly untouched by tourists and is just as (if not more) stunning than those in Paris. It is simply called Orléans Cathedral and is located near the city center. You can judge the sheer vastness of it by the sub-zero temperatures in there (just kidding, but it is chilly so bring a jacket!)

This city is also where Joan of Arc was from, so there are multiple statues honoring her and the sacrifices she made for the French Army. The town hall (located near the cathedral) is open to the public and boasts information about her as well as the history of the town.

Finally, there is an incredible town-square with a carousel near the center and little cafes/restaurants lining the sides. We sat here and just enjoyed our drinks while the children played after they got out from school. In the middle of the square there is another huge statue of Joan of Arc, a truly classic site in Orléans. 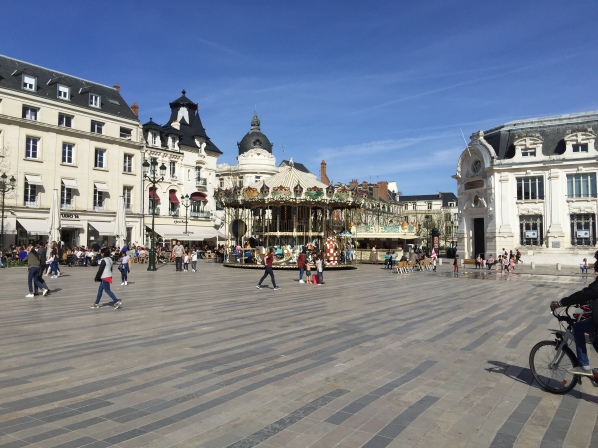 While we were there, a lot of construction was being done on the roads. Before we arrived at our friend’s house in Orléans, the GPS kept telling us to go down streets which were clearly closed and/or blocked off. I saw other cars completely ignore these signs and drive on the damaged roads, so naturally I told my mom “It’s okay, go ahead and ignore the signs.” Eventually she did, but when we reached a road that was completely torn up and impassable, she made it obvious she was NOT driving on that. The only problem was that the GPS didn’t have alternate routes to get to her house so we ended up getting there two hours late because of our horrible navigation skills. A couple days later, our friend, Sylvie, was driving with us and told us it was completely normal to drive on roads under construction (even if it meant you had to drive on the sidewalk). However, she was adamant that we did NOT go over the posted speed limit as we would be fined. Extremely interesting (and different) driving rules than in the USA haha!